Reflection and realisation at BCD 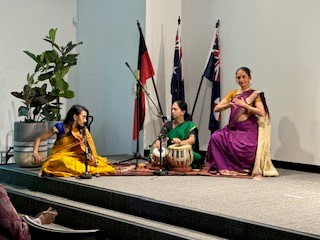 Attendees to the Behind Closed Doors events on 3rd and 4th December were enthralled by the immersive arts performance that combined an eclectic mix of Indian classical dance and music with narrative to shine the spotlight on domestic violence in South Asian families.

The narrative follows the journey of a mother and daughter as they confront the realities of their situations and its impact on their lives and family. “It resonated with me on so many levels, I felt that it reflected the stories of families I know including my own,” said a young woman of Indian origin. “Its only now that I realise the power and destruction of coercive control.”

“It certainly was an eye-opener and so beautifully narrated with the accompanying music and dance. Such an unusual combination with such a powerful message. I loved it!” said an attendee.

“It reflects my own story and the trauma I went through as a mum with two young children. Only when I left the DV relationship did I realise that many of my friends were going through the same thing and worse. We really should talk about these issues more,” said another guest.

The common voice was that DV related issues in South Asian communities have been hidden and considered as normalised behaviour for too long.  Performances like Behind Closed Doors can create awareness and education to bring about reflection and positive change.

Behind Closed Doors is a conversation starter and a terse reflection into how domestic violence affects families on so many levels with long lasting consequences.

The show will return in 2023, performing in Canberra and Melbourne.